And apparently so is every other letter of the alphabet.

I was recently enlightened to the incredible diversity of the apple and have since become completely enamored with the fruit.  Worldwide there are 7,500 named varieties, and within North America the number stands around 2,500.  These varieties are referred to as cultivars, which means they have been created or selected intentionally and maintained through cultivation.

This information is fascinating to me on a number of levels.  Firstly, who knew that something so iconic, like an apple, is in reality a diverse group of thousands of varieties, each with individual characteristics differentiating them in color, shape, and (most importantly) taste?  Secondly, cultivation implies human intervention, meaning that apples as we know them do not exist independently in the wild.  In fact, the only native apple to North America is the crab apple, a tiny and very bitter cousin to the apples we eat.  In this way, the apple, which has inserted itself into any number of significant contexts, has developed hand in hand with human societies.

Because of this fundamental link between apple cultivation and human development, the apple has very successfully inserted itself into numerous human stories.  Apples are key figures in American propaganda, folklore and fairytales, and, perhaps the most well known reference, the Garden of Eden.

Historically, the first apples brought to North America were cultivated to produce hard liquor for the early settlers.  Since then their functions have multiplied and apples are now a staple of the American diet.  They are incredibly versatile for cooking and eating raw.  This versatility is a product of the variation within the various cultivars available.

However, despite the incredible potential for variation, the commercial market for apples has been severely reduced.  Only 100 varieties are grown commercially in the United States (though there are many heirloom varieties grown privately and for niche markets), and only 15 cultivars account for 90% of apple production.  These 15 cultivars (Red Delicious, Gala, Golden Delicious, Granny Smith, Fuji, McIntosh, Rome, Empire, Honeycrisp, Braeburn, Cortland, Empire, Ginger Gold, Jonagold, and Idared) are among the sweetest cultivars known.  They have been systematically selected and propagated for this characteristic in addition to being among the longest lasting varieties making them ideal for shipping long distances. Apples are commercially produced in 32 of the 50 states, with the top being Washington.

This abundance, in terms of history and biological diversity prompted me to investigate the apple varieties in my own life.  Over the course of several weeks, I explored the marketplaces in my neighborhood on the north side of Chicago including a Jewel Osco, a Treasure Island, a Whole Foods, a Trader Joe’s, a Walmart Express, a Walgreens, and a corner store.  Some of these markets I frequent and some I do not, but all had a selection of apples to choose from.  (All of these locations are within walking/reasonable public transportation distance from my apartment, which brings up many issues of privilege and accessibility that I won’t get into here.)  During my meandering visits to these retail locations I began compiling a list of apples that I came across, which resulted in 20 different cultivars including Fuji, Pink Lady, Granny Smith, Red Delicious, Golden Delicious, Gala, Honeycrisp, McIntosh, Jazz, Braeburn, Empire, Cameo, Criterion, Gravensmith, Matsu (Crispin), Ginergergold, Jonagold, Pippin, Rome, and Winesap.  As an exercise I have illustrated each type of apple, trying to emphasize the visual diversity within this common (and taken for granted) fruit. 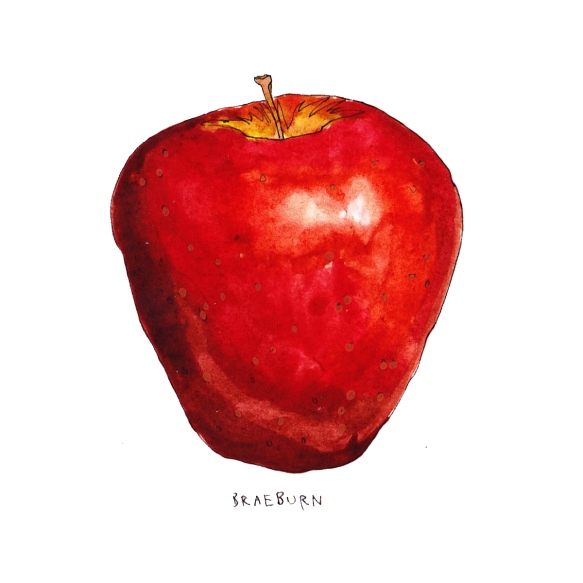 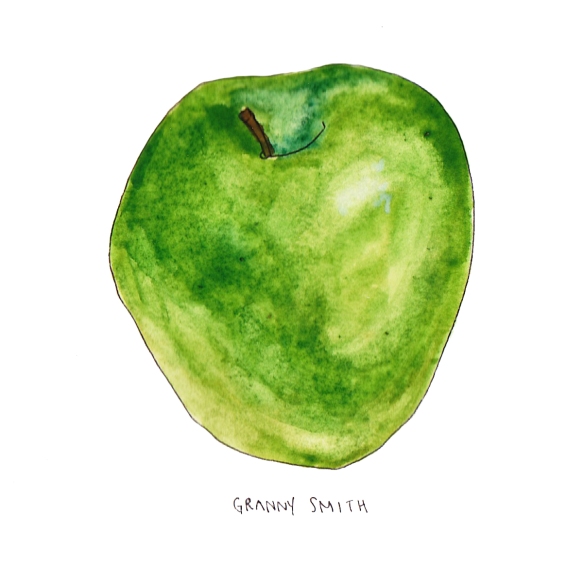 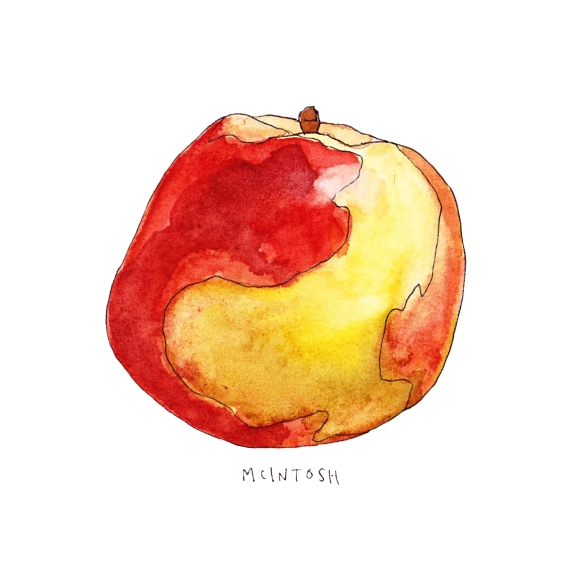 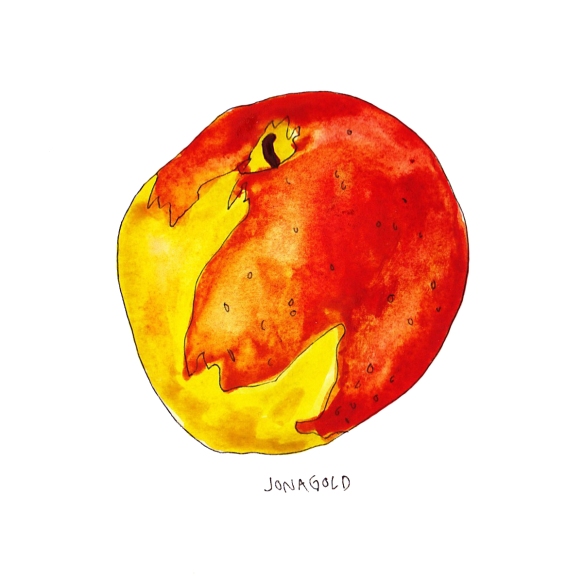 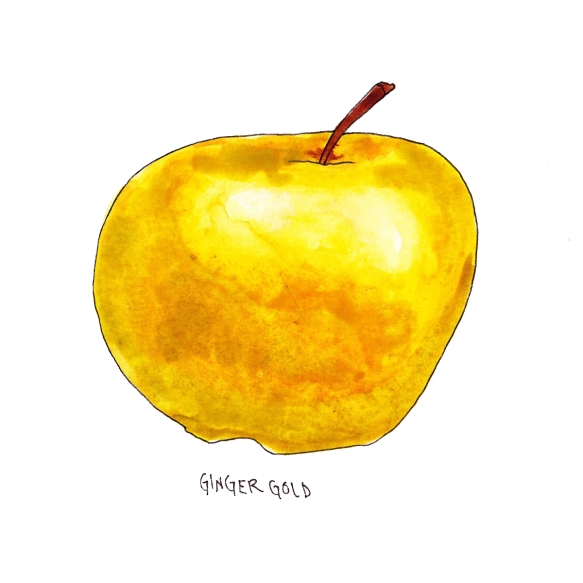 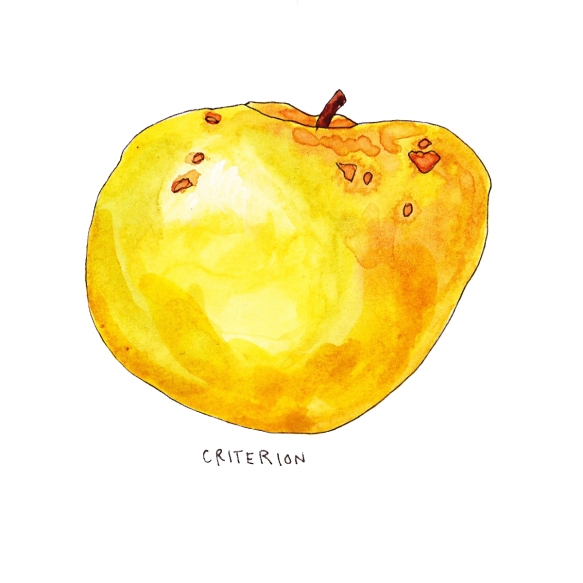 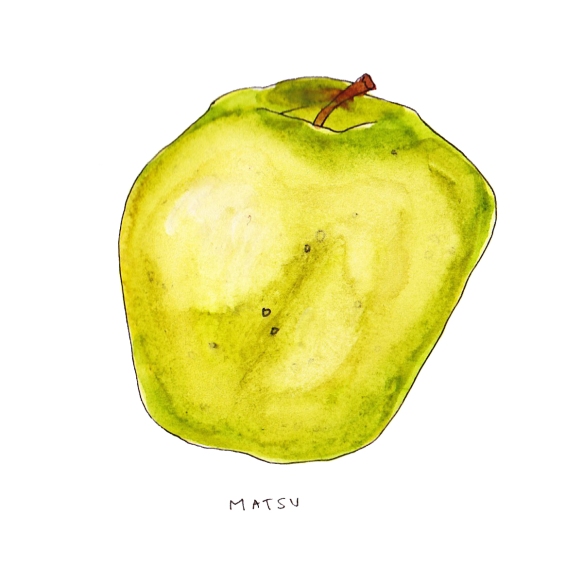 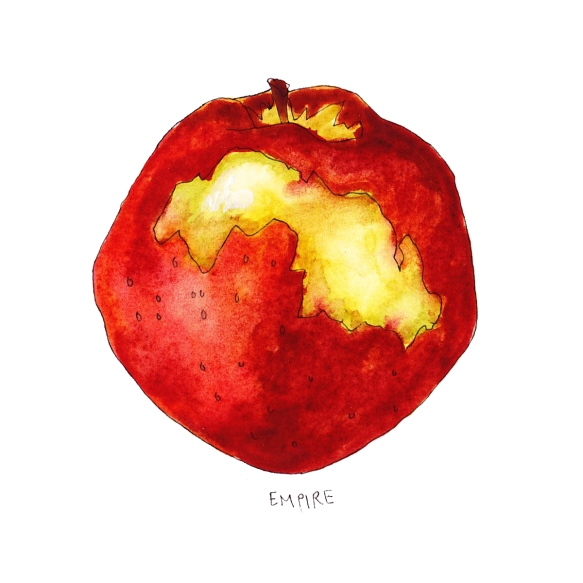 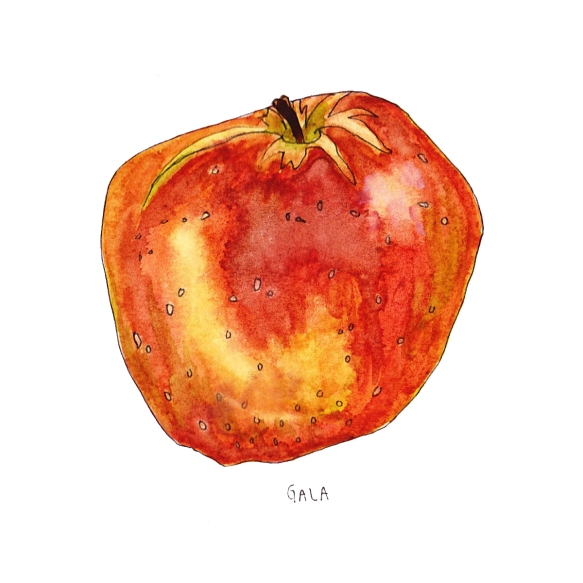 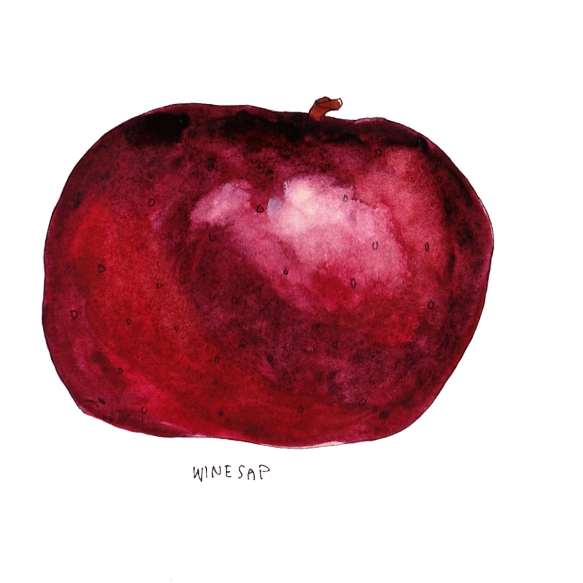 This process over the last few months of researching the history, biological potential, and the commercial aspects of apples combined with store visits and observational drawing has been an intensely rewarding experience.  My eyes have been opened to the complexity and subtlety of such a familiar thing in such a wonderful way.

As an artist, my practice often deals with various degrees of obsession and archiving structures.  I was immediately drawn to the existence of apple archives and seed banks that preserve and propagate the thousands of varieties that exist.  And the beauty of the fruit themselves, each type possessing its own color palette and patterning, has greatly inspired me.

The end result of this effort will be the production of an alphabet book dedicated to apples in hopes of propagating the notion of biological diversity and potential early in life.  This project is currently in progress, but will consist of a selection of 26 apple cultivars paired with a corresponding alphabet letter, for example, “B” is for Braeburn.  Look for the end result later this summer!