An up and coming movement towards healthy and sustainable eating is directing awareness to schools and school children’s eating habits. People like Jamie Oliver and Alice Waters are actively contributing to this change. In addition to Oliver and Waters, there are also lesser-known people approaching this matter. I have personally spoken to and interviewed some Chicago area farmers and a school principal, namely Alexander Tuchman, Andrea Hazzard, and Anne Gillespie. Jamie Oliver has stated that most people are not even aware of where their food comes from, and he wishes to teach everyone how to grow, cook, and eat healthy.

Alice Waters was inspired to start the Edible Schoolyard project as a result of passing by a run down public middle school in Berkeley every day on her way to work, as a chef at her restaurant. Having also spent a number of years as a teacher, Waters believed that schools influence children, it is just as important to supply the students with an adequate environment. During an interview she had with a journalist, she happened to mention her disdain for the way this public middle school was treated, stating that it was “a great example of how not to use land”[1]. This comment then lead to Waters receiving a letter from that very school’s principal asking whether she would be interested in getting involved in some way to make improvements.

From here, the Edible Schoolyard began. A project that involved students to plant and grow their own foods, and offered a kitchen where the students could then learn how to cook the food they grew and picked from the garden. Through this project, Waters (and other adults helping out the school garden, including parents) realized that the kids were more excited to eat fresh greens after they had experienced the whole process of growing and cooking them.

Below is an image of the page in Edible Schoolyard that lists the principles this school’s (and Alice Waters’) project is based upon. 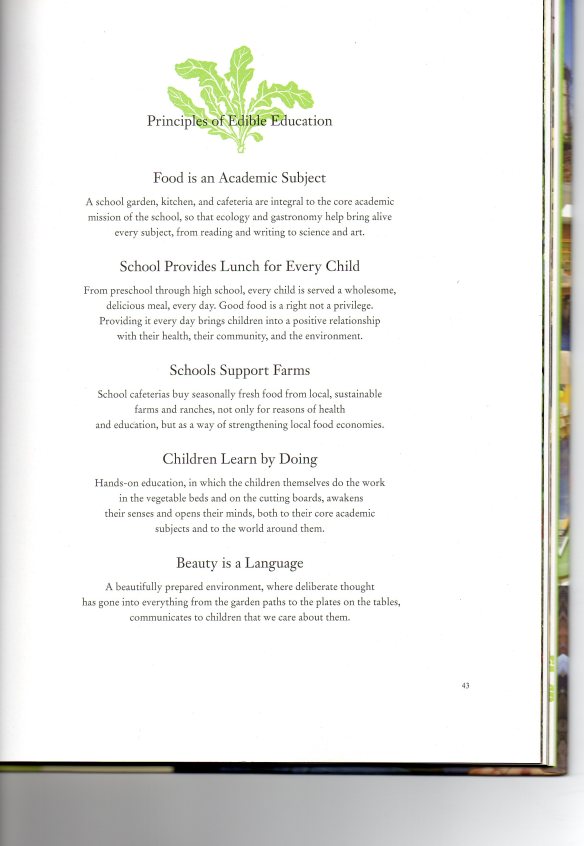 Jamie Oliver’s work is similar to Waters’, based mainly in the UK and USA. He has founded a number of projects and foundations, such as Jamie Oliver’s Food Revolution, Jamie Oliver’s Kitchen Garden Project, The Better Food Foundation, and more. Not surprisingly, Alice Water’s Edible Schoolyard project is also featured in the list of companies and individuals whom Jamie Oliver connects with.

The Kitchen Garden Project is one of Oliver’s projects that I researched more closely. This is due to the fact that it is about Oliver working with elementary schoolchildren in the UK, and bringing a reform to the UK education meal plan system. As of currently, Oliver says on his website dedicated to this project, him and his team are working directly with two pilot schools. The Kitchen Garden Project aims to provide schoolchildren with integrated growing and cooking classes, alongside all the other subjects. Also, online Oliver lists appealing results sourced from the Stephanie Alexander Kitchen Garden Project in Australia. Some of which are “improved behavior and engagement in learning […] increased willingness in children to try new foods […] increases school community connection” and more. Oliver’s three key ambitions through implementing this program in schools are to educate, empower, and inspire.

In addition to the numerous school gardening projects, Oliver also work with teenagers and adults. Oliver specifically has a program called Fifteen; this is a high end restaurant that goes by the same name, located in London. On their website, Oliver explains that his incentive to open this restaurant was “on one hand to create one of London’s finest restaurants and, on the other, to use the magic of cooking to give young people who’ve often faced enormous challenges in their lives, the opportunity to unlock their true talent, through great training and mentoring”.

Locally, in Illinois, Andrea Hazzard is busy tending her own farm, and offering anyone interested the opportunity to volunteer with her. Another pioneering farmer working in Illinois, Alex Tuchman, an alumni of Loyola University is an avid operations assistant of the Loyola Student Farm. Both Hazzard and Tuchman run active CSA (Community Supported Agriculture) programs, and enjoy teaching others about their practice.

In short, for any who are not familiar with CSAs; these are programs that deal specifically with farmers connecting with their customers. Anyone in the public who is interested can buy a share for each active farming season (that works like a membership), and receive weekly deliveries of freshly picked produce baskets. The amount of shares offered by a farmer may vary on the size of the farmed land.

Following my research on schoolchildren and meals they are supplied with, the Loyola Student Farm sparked my interest too. I sat down with Alex Tuchman earlier this spring to ask him some more personal questions on his role in the farm, and his opinions on the connection between school meals and their students. It turned out to be a very fruitful interview, with a lot of interesting and useful information (here is a link to listen to the full version: https://rootingourfood.wordpress.com/2013/04/14/interview-alex-tuchman/). During the interview I ask Tuchman to recall his past experiences with school meals: “Lots of salt and oil” is what he could remember.

A couple weeks after my interview with Alex Tuchman, and gathering research about Jamie Oliver, Alice Waters and her Edible schoolyard, I emailed Anne Gillespie at the Academy for Global Citizenship, asking to meet with her at the school to visit their school garden and ask her more questions. Anne Gillespie is the co-founder and principal of AGC.

As Anne and I walked out the doors into the parking lot, we were standing in the school garden. It was partially closed off from the rest of the parking lot, with growing beds side by side leading to a small greenhouse. Opposite the growing beds is the playground equipment area with a chicken coup and three chickens. Anne told me the chickens are allowed to roam freely around the parking lot area (they stay near the growing beds and playground), but they are not allowed to eat the foods their students are growing. The campus I visited was the main one that offers K-2nd grade classes, and the second campus houses the 3rd-5th graders. The children have the opportunity to plant, grow, and pick a variety of vegetables. Since the playground/garden area did not appear large enough to be able to feed 300 children daily, I asked where else food is sourced for the breakfasts, snacks, and lunches served in the cafeteria. Anne brought me into the cafeteria where there was a map on the wall, and highlighted were the areas of farms who supply them with the additional foods. All of which are in Illinois and its surrounding states.

The questions I had for Anne were based on figuring out her opinion on the current school meal system, and what could be done to reverse it in order to feed all school children more healthy options. I started off asking how she has seen the school transform lives of both children and parents; Anne lists seeing children learn to read and write, families starting to recycle or start small gardens, and chickens at home. We touched on the subject of people not knowing where their food is coming from. Anne believes that chickens are a good place to start learning where your food comes from by seeing that an egg comes from a chicken and not from the refrigerated area at the supermarket.

As the conversation turned to the current meal system in schools without gardens, Anne explains that money is the answer, and it is what drives most daily activities. However, she doesn’t think it’s too late to change the meal system in a healthier way. To make this change, the government would have to shift, and people’s mindsets making assumptions that kids won’t eat anything healthy, and they like sugar.

I asked Anne if there has been an experience that has impacted her more than others. Although she sounded like limiting the answer to a single experience wasn’t enough, she admitted the day they were approved to become a school is definitely high on the list, because it gave her the opportunity to be in the position she is in now, and has learned a lot.

Later this summer I plan to compile a bound book of images and hand written sentences made by the students at AGC. These images and sentences will come from some prompts I have accumulated; asking them questions like what is your favorite food? And draw you and your friends picking vegetables from the garden. The book will then be exhibited in SAIC’s Sullivan Galleries this summer through fall.

The aim of this project is to collect as many sheets I can from the students, and each student will have the freedom to choose any color of paper to either draw or write on in order to create individuality. I am also hoping that through the different ways the prompts are responded to, anyone who chooses to look through the final book is able to notice differences, and pick up on the children’s characters.