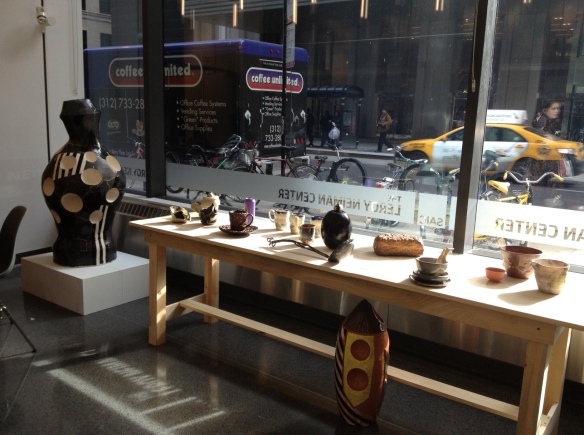 This exhibition came about through a series of curatorial projects and discussions, starting with a focus on coffee.

At the Storefront’s Blend: Discourse by the Cup local coffee was disguised and served to visitors while viewing coffee related documentaries. Conversation on the healing attributes of coffee culture, the faulted morality of foreign coffee production, and the space between these opposing views led to a larger conversation. Specifically about the physical act of coffee-drinking and its affect on the consumer. There was interest in the coffee-mug-vessel that interprets the consumption of the dark brew and suppose the further consumption. Even when an individual is not necessarily drinking coffee the moment of consumption continues in the process of holding, picking up, and even washing the cup.

An open call was sent out to the SAIC community asking for student and artist participation in an exhibition centered around objects that implied more than one use, more than one purpose of physical consumption. Ultimately the works that were received were put interpreted the “Constant Consumer” through works that flatten the hierarchy between utensil and art object, works that commented on the complications of daily consumption, and works that reflect a portion of the artists’ character.

The exhibition led to questions such as: How does the form or accepted context of consumption in turn become as equally consumed? Where did this significance originate? This interest in how these contingent prosthetics of eating informs the consumer’s conception of value led us to the publication of “Eating Prosthetics”. A parallel conversation to “Constant Consumer” around the historical weight of the utensils themselves.

The ways our daily consumption consumes us.

SAIC undergraduate student Stephanie Chu’s animated feature Coffee satirizes the consumption of coffee as habit forming and at its extreme, addictive. Chu’s corresponding chalkboard drawing, a growing pile of cups representing a small percentage of SAIC’s coffee consumption will be executed at regularly scheduled weekly intervals. The artist will extend the pile each week to mirror the coffee consumption by students at the Neiman Center Café. Coffee plays an important role in the exhibition Constant Consumer in a humorous nudge at the personal and social ramifications of our daily habits, such as coffee drinking. 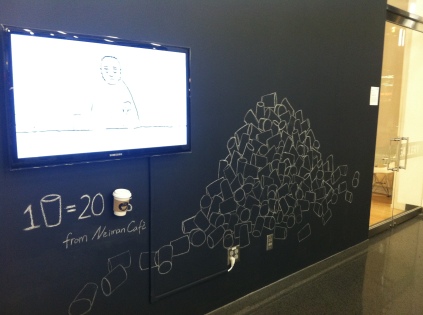 The Ritual of Everyday Consumption.

The Constant Consumer focuses on the dilemmas and evolution of contemporary daily consumption. Struck by how disconnected we are from the products we consume, the Constant Consumer allows us as curators to delve into issues of consumption, community, morality, commodity, and ethics. Through the elevation of the most mundane of coffee-drinking vessels – the white paper cup – to the status of a precious “art” object worthy of our attention, Ashley Szczesiak’s LATTE dada showcases how modern coffee-drinking practices can impart “carefulness and thoughtfulness in regard to consumerism” (Szczesiak). 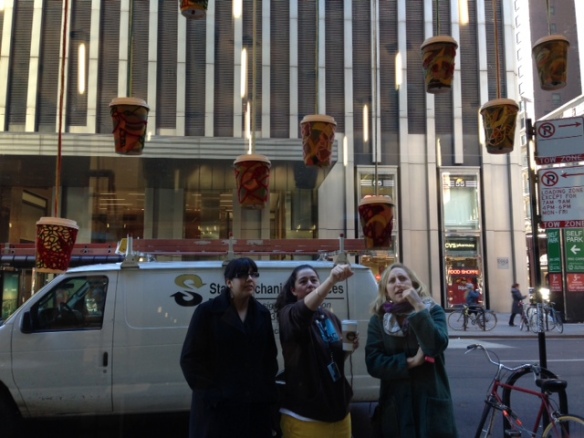 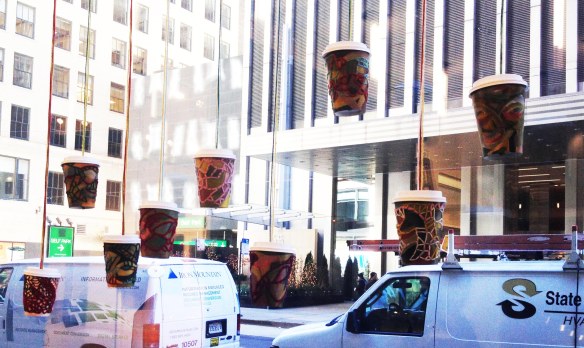